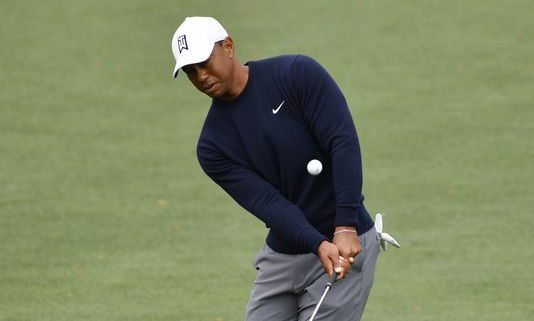 Tiger practicing before his opening round at Augusta.

The Masters Is Back!

While it seems like the golf season never really stops on Tour, it does stop and start for most recreational golfers. Winter has a funny way of doing that to us. For most diehard golfers, winter stands no chance of holding us back once The Masters gets underway. For distant golf fans, the first glimpse of Amen Corner on TV is proof that winter is actually gone. Northerners who haven’t swung a club since Thanksgiving scrounge an old ball from the garage and roll a few putts across the carpet during commercials. The Masters is a magical event on beautiful hallowed ground, and lets us know that spring is here, and it’s time to play golf!

This year should prove to be a very exciting event. While it’s impossible to predict the outcome, I do believe it will be exciting. In case you haven’t heard, Tiger Woods is back on his game, and rest assured the only thing on his mind this week is winning. He is one of my favorites going into the event just slightly behind Justin Rose and Paul Casey. While my brain may point me to other competitors, my heart will be pulling for Tiger to once again slide the green jacket over his shoulders. (I think many of us are rooting for him in his newfound “underdog” role.)

Last year I wrote why I felt The Masters was the best sporting event in the world, and it proves my point year in and year out. Without fail, heavyweights battle for the title and always contend. Need drama, trust me, the back 9 on Sunday will not let you down. I think everybody remembers Sergio draining that putt on 18 to win last season. Or Jordan Spieth’s collapse on the 12th a few years back.

Storylines… Do I even have to list them? Will Tiger Woods win a major for the first time in almost a decade? How will Dustin Johnson fair after having to WD due to injury last season? At 47 years old, can Phil Mickelson still contend? One thing we know for sure, in order to win at Augusta, you’ll need to bring your whole game. This course will test you in all aspects.

One aspect of which would be the mental approach to golf. Like Bobby Jones famously said, “Competitive golf is played mainly on a five-and-a-half-inch course… the space between your ears.” The man was one of the best golfers of all-time because he worked just as hard on his mental approach to the game as he did his physical preparation. In listening to the early quotes from the players, I think a lot are getting back to that.

During a Masters press conference, I heard Jason Day say, “I’d rather fail in front of millions than fail in front of nobody.” As a coach and a fan, I think that this is a really interesting quote and shows exactly how mentally tough Jason Day is. In my mind, he is talking about the work that goes into simply getting to the Masters that nobody sees. He refuses to fail there, so he can get to the Masters, accepting the fact that he may fail on the biggest stage, and he is at peace with that. That is a competitor and someone who is not afraid to fail. When I heard that quote, I heard an individual who was mentally tough.

Jason Day is simply one example. Each and every golfer knows that this is one of, if not the biggest event of the season. They will be giving it their all with each and every swing. The fact that the best players in the world tend to win more often than not speaks volumes to the golf courses credibility to find a proven champion. You need to have all the shots, knowledge, talent, and mental toughness to win a green jacket. Amazing things don’t always happen at the Masters, but they do more often than not, and that’s why I’m thankful it is here at last!