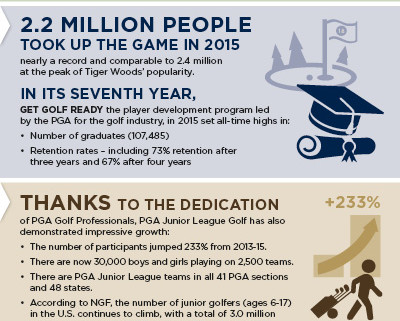 With more rounds of golf played in the United States last year, along with a major increase in youth and women golfers, golf’s future looks bright. This parallel momentum was noticed at Chequamegon Bay Golf Club last season. Our junior golf school grew substantially over the previous season, and women participated in much greater numbers in 2015. Growth within these two demographics is a big change for a sport that has been dominated by adult male golfers for many years.

For years the golf industry focused on its best customers, which resulted in extraordinary success. However, the golf industry, like other industries focusing on a narrow consumer base, fell victim to its own success. This early prosperity lead the golf industry to build its language and culture around men. Today, there is a huge opportunity for golf professionals and industry insiders to use their skills and customer service ability and ADAPT them to welcome a new audience.

In 2013 women represented 16.6% of all golfers. In 2015 that number increased to 22.6% of all golfers. Programs like “Get Golf Ready” are introducing women to the game, and creating a comfortable environment for them to learn in a group setting. Many golf courses are also creating women’s leagues focused on a fun social setting, rather than the male driven competition aspect. Events such as a wine and nine, with partners drawn from a hat, focus on building relationships rather than simply being competitive. These social rounds of golf are gaining momentum and bringing more women to the golf course.

Junior golf is also on the rise. Juniors playing golf rose by 500,000 from 2010-2015, outpacing almost every other major sport. PGA Junior Golf League is a major contributor, creating a Little League environment on the golf course. Junior golfers are given uniforms and compete in a team setting. This program has been a huge success, growing over 233% from 2013 to 2015.

As a PGA member I wake up each day trying to bring the sport of golf to life. It is our job as members to grow the game and seeing more women and juniors playing golf is crucial to the games overall health and success. 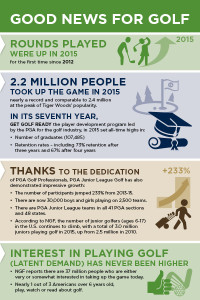